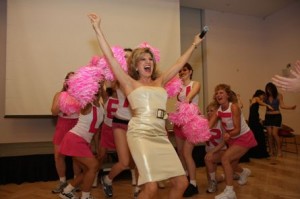 Do you ever doubt your sanity?
I know I do.
And guess what- in a culture like the one we are living in, that is a really good thing to do. Why? Well, in this world, if you walk around wanting to be (or knowing you are) hot, sexy, successful, well paid, outrageously living your passion, and having incredible intimate relationships- all at the same time- people will think you have a few screws loose. In fact, if you actually giddily believe that all that goodness is your birthright, most people will think you have lost your mind.

Why? Most people who are sane, suffer their way to the top. Or the bottom. Or the mediocre middle. I can join that parade, too, and I have.

What if being ‘insane’, like that, was a really brilliant choice?
Let’s see if Sister Goddess Annie can talk you into it….

I laid down on my fluffy new bed in my not-so-fluffy little basement apartment and thought, “Now what?” It was just shy of 2 months after leaving my marriage of 10 years. Though I knew that I HAD to leave something so toxic, I wasn’t sure what to do next…but at least I was free. Still though, in the silence it hit me…I was alone. I was afraid.
Like a naive, lost girl who had no idea of her own potential, I accepted the first relationship that came along and was hurt deeply yet again. He too, told me my dreams were unrealistic and made me feel as if my desires were way beyond my reach. Be a famous author? No way! Travel the world? Yeah right! Attain financial freedom? Impossible! He echoed the sentiments of my ex-husband that I should live for him and not for myself. I let him go and accepted loneliness and pain as my destiny. That was February 2008.

As fate would have it, I started Spring Mastery in March. Thank goodness I had signed up months before when I attended a Mastery graduation with my dear friend Rachel. She asked me to keep her company for her two cousins’ ceremony, which I had assumed was a graduation for some sort of formal college (since she had given me no other detail). I hadn’t seen her in months so I just took it as an opportunity to spend time with her. During the Mastery graduation, I went from thinking she had dragged me to a silly club for chicks to being moved to tears by the stories of triumph some of these women shared. The pride and love in the room was overwhelming. I signed up that day. If I hadn’t, I don’t think I would have by the time the course was about to start because that contagious positive energy would have faded by then. I was weaker. I was broken.

I attended my first session with a heavy dose of cynicism. It was easy to dismiss all the pink feather boas and upbeat music and over-the-top joy as just plain insanity. I brag that I know now that the cynicism that day was to mask my fear. I was smug while sitting there in my seat among 200 women who meant nothing to me. I decided within the first 5 minutes that I wasn’t like them. I didn’t need this. It was all fake…HAD to be! But hey, since I had invested the money, I wasn’t going to leave. I figured even if I would make one new girl friend, it would be worth it…though it’d be one expensive friend! I could never have known that day how much that decision to not leave would change my life forever. I brag that even at my lowest, there was a tiny bit of light left in me that made me stay seated and give the “insanity” a chance.

Still though, fear is a powerful thing. Though I was present at the events over the next few months, I fought the program. I thought at the time that I was fighting FOR my life until it hit me one day that I was actually fighting AGAINST living. I was still afraid of seeking anything beyond what I knew and ashamed to admit it, especially since I had become involved with another man who wasn’t giving me what I deserved. I was still not ready to receive joy because part of me didn’t believe that it existed and part of me didn’t feel like I deserved it.

I will be forever grateful that it DID hit me one day during a particular Mastery weekend and it was as if my universe completely shifted. I cried harder than I had in months in the arms of supportive sister goddesses, in front of everyone, in front of the 200 women who supposedly meant nothing.
I realized for the first time in my life how much I was worth and that I was more than what I currently was. I finally embraced the notion that not only was it ok to SEEK what brought me pleasure, it was ok to flat out ask for it!
At that moment, I made a promise to myself that I would.
In reflecting on all that we had been through together as a group, though we each had our own separate lives, I realized how much some of these women really meant to me. Hearing their stories, sharing their tears, high-fiving their accomplishments… it all helped create a unique bond. It was a safe space of sisterhood that I didn’t even know I needed but was ready to embrace (sometimes quite literally). I finally saw clearly through my tearful eyes that the woman standing at the front of the stage (Mama Gena) in all her fluffy glory was not insane at all. She was a genius! Not only did Mama Gena THINK of this program and gather such powerful women as resources to lead us through this journey, she whole-heartedly (and sometimes a bit firmly) pushed us to our limits.
All this encouragement to STRETCH brought out the best in me and I finally was able to live up to my online screen name: eyesopen77. My eyes were opened wide enough to see that Mama Gena’s push for us to be transparent and revel in our sorrow was the perfect way to move through and move past it. Only then could we have room for pleasure. Only then would we realize how much more we could and should have. Her insistence to work WITH our “sisters” to help bring each other higher was infectious. The high from such a positive outlook was intimidating but there was no denying that it felt good. I wanted more!
Now, 2 years later, I barely remember what it was like to feel so defeated. I stretch in everything that I do and am very proud to say that I have reached a lot of my desires! I keep having to rewrite the list and adding more! I’m now in a healthy relationship receiving and giving love beyond what I had thought possible. I’ve made Manhattan my new home and learned it like the back of my hand. I’ve vacationed to Dubai and spent weeks in Curacao. In 6 months, I’ll be taking a 2 week trip through Italy. I’m in the best physical shape of my life and feel strong in my body AND mind. I’m successful in my corporate career while continuing with the pursuit of my dream to be a world famous author. My second published book, “I Brag.” documents my post-divorce journey and I owe it all to Mama for giving me the guts to brag like I do and to write in such juicy detail. This is the beginning of my “Brag series” as I’m already writing books #3 and #4!
Don’t get me wrong though, it WAS hard work, but worth every bit of anger, frustration, and confusion! After all, you can’t just sit and listen, do nothing, stay closed, and expect miracles. But you CAN open up your mind and your heart to receive. You CAN decide for yourself what you’ll get out of it.
I brag that I made a choice to do Mastery despite my fear and now I see that I chose ME that day. To any woman who wonders if Mastery is worth it, I’d say this:  Are YOU?
Thank you Mama. With your guidance I desire without limits. I conjure without doubt. I receive without fear and I am grateful.
With Love,
Sister Goddess Annie
Do you want to join the ‘insanity’?
Are you ready to lose your mind with me?
I hope so.
Let’s mess with everybody’s head and get you exactly want you want, the way you want it.

And if you enroll by this Friday, March 12th, you can get an absolutely insane discount of $350 off!