There are so many ways for a woman to ‘go for it’. From bold and blazing balls of public fire, like Hillary Clinton or Beyoncé, to quieter but equally powerful ways, like my mama.

Many of you know my mom because she has not missed a class weekend in over 12 years.
She is the Bubbe, or the Global Grandma, for the countless women who have been through the School – always there to give a hug, a push, a hand to hold, or a shoulder to cry on.

But I have not talked much about her life. Or how incredible she is outside the room.

Are you ready?
Grab a cup of tea and be inspired.

My father passed over 10 years ago.
After a few years of recovery from that loss (they had been married for over 50 years), she decided that it was time to find someone.

There was a man in her building who she had known for 25 years. His name is Ted. My mom was close with his granddaughter, and when she ended up in a challenging circumstance, my mom remained close and connected to her. Ted lost his wife, and about a year after her death, my mom noticed him in a new way.

She also noticed that all the widows and divorcees in her building were surrounding Ted like a school of sharks smelling blood in the water. They would leave little packages of homemade cookies at his door. Or cook dinners for him. But my mom had a card that no other widow had dared to play: She flirted with him.

One day, she ran into him twice. And as they laughed about that, she said, “If we run into each other one more time, you are going to have to take me to dinner.” The third time was the charm. They went to dinner. And according to Ted, once he hugged her, that was it. He knew she was his woman.

A year later, they were engaged. In the 5 years they have been together, they have travelled to Vietnam, Thailand, Florida, various cruises, and as I write this, they are in Cuba.

It sounds pretty rosy, right?
And it is.
But each of them has had to rise above the effects of aging.
Ted has short-term memory loss. And ongoing issues with COPD.
Rather than complain about that, my mother uses his condition as a chance to improve and exercise her memory skills, because now she has to think for two.

Even though Bebe has been told by dozens of doctors that she needs a hip replacement, she refuses to go under the knife and instead takes care of her body by swimming every day and doing a series of physical therapy exercises.

She is in an age group where she loses lifelong friends regularly. But rather than sitting at home and feeling sorry for herself, she reaches out and makes new ones.

And she would never ever miss a Mastery session.
Why?
Because she loves to give back. She loves to contribute to others. She loves to be part of the joys and challenges of a good, sweet, hard life.

She claims that she never would have ever won Ted’s heart if she had not had the support of the tools and arts she learned at The School of Womanly Arts. But, I know this about her: she was flirting long before I was born. It’s in her DNA, just like it is with every woman. It just gave her the courage to use what she’s got and get what she wanted.

My mom is amazing in other ways. In addition to a relentless urge to give back, she has a relentless urge to grow. She takes classes in meditation so she can explore and expand her inner life. She is a talented sculptress and her home is filled with art that she created. She grows a significant crop of herbs and tomato plants on her terrace. She lives across the street from the Philadelphia Art Museum and is there almost every week. And now, years after she retired from her work at Hedwig House, where she helped rehabilitate people with mental health challenges, she still keeps in touch with many of her former patients.

And maybe most importantly – whenever she has the chance, she dances.
Seriously.
She is an incredible dancer. She knows swing, salsa, folk dancing.
And if there is ever any opportunity for her to twirl, she takes it.

Women are amazing.
No matter what our age, we all have a relentless urge to grow, to ascend, to take everyone in our world higher.

It is such an important legacy for women to not only live, but model for one another.

I hope my mama has inspired you a bit today. She inspires me every day.

p.s. This past weekend—the kick off of Mastery—absolutely took my breath away. I witnessed the most glorious pas de nearly 500 women, reclaiming their power and unwrapping their radiance – not with fear and trepidation, but with the enthusiasm of a gang of preschoolers let loose on Christmas morning. What a privilege it is to serve this community. Here’s a few pics . . . 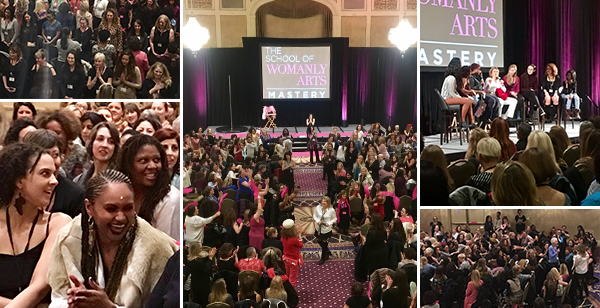