Beyonce, Paris, and the messy truth of creation.

There is a part of creation that hurts. That could seem humiliating. Or embarrassing.

Creation is … chaotic. Feminine. Co-operating with forces, more than rules.

Raw. Risky. Fueled by passion.
Making no sense, sometimes.
Choosing into a living, breathing truth that may be utterly unrecognizable to others.

I had my ass blown every-which-way-wide open a couple weeks ago, when Beyoncé released her new video album, called Lemonade, where she takes us inside her journey from rupture to reclamation.

Here she is. Creatrix. Woman. Goddess. No longer a girl, hiding her truth. Now, rather, a full-fledged woman standing in her sacred impenetrable vulnerability, creating art from her life.
Unprecedented. Not just musically, artistically.

The beauty of her transparency was unlike anything we have ever seen before.

What we have never ever seen before is anyone play the betrayal card the way she plays it.
Beyoncé’s husband cheats on her, but, unlike millions of women before her, she does not take herself out of the game.

Rather than becoming a victim, she gets into an even deeper connection with her body, her emotional range, her ravishingly beautiful expression.

She owns every drop of who she is and how she feels and what that means, not just for herself, but for every woman on this earth who has been overlooked, underserved, passed over, ignored, and betrayed.

She does not turn on her creative journey as a woman and an artist just because it gets messy.
She does not self-sabotage or withdraw or shut down.
She gets utterly, gorgeously loud and self-righteously proud.
She stands in vulnerable pride at all she is feeling, and the depth and meaning of her love—and her choices only intensify.
She stays connected to her own divinity during her most devastating rupture.
And by doing so, teaches all of us how it is done.

As usual, the timing was magical. I first watched Lemonade in Paris, as I prepared for the arrival of my Creation Course students, for the completion of a many-month journey together, studying and embodying and practicing the very truths Beyoncé evokes.

Sisters, the game is no longer being ‘perfect’. The game has become the constant creation and recreation of a woman’s ever unfolding truth.

It is too easy to lose our lives in self-doubt or waiting for our prince to come or being angry with our circumstances.

To choose to be the author of your storyline is to choose never to be a victim.
To choose the gift of life at every moment, no matter what.

And that is the power seat.

p.s. Check out our photo album on Facebook to catch the fumes of Creation Course in Paris. . . These women are radiant, brave souls. We made magic and mayhem together. So very grateful.

p.p.s. I’m thrilled to be participating in the Hay House World Summit again this year – a series of over 100 lessons and interviews, to help you on your path of self-discovery and personal growth. Really good stuff here – click here for free registration and access. 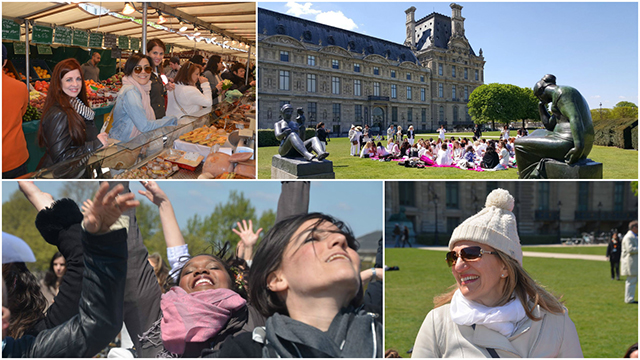 As the rains pour down, there is this.

4 “Rules” to Get Your Desire, Faster.