How the hell is this my life?

When I walked through the doors of the School of Womanly Arts, I was getting a divorce at the age of 37. I was beyond devastated. On the other side of this journey, I am a proud new mama at the age of 41, partnered with my husband and best friend, and surrounded by sisters. It’s been a ride, an epic journey that started right around rock bottom. . .

February 2011. I was sitting staring blankly at my computer screen at work on a cold Monday morning, thinking, “How did I get here? How the hell is this my life?”

I had spent the previous weekend at an entrepreneurship workshop, trying to figure out how I was going to pay my bills now that I was single again. But rather than talking about strategy or refining my pitch, I basically spent the entire weekend crying. I had a pretty regular practice of crying back then; tears were almost always smarting behind my eyes, as much as I tried to look like I had it together.

I wasn’t happily married, and actually had wanted the divorce for a long time, but now that it was really happening, I totally fell apart.

Rather than feeling liberation and excitement about a new beginning, I felt lost and really alone.

I torpedoed all the hurt, grief, regret I was feeling directly at myself – “If I had only been more/less this/that, then I could’ve had a successful marriage.” I felt immense shame for getting divorced – it took me a long time before I could actually say ‘the D word,’ as backward as that sounds. It just seemed so big, I couldn’t get my head around it.

At that entrepreneurial workshop, my deep sadness couldn’t be contained. The woman who initially recommended I attend the workshop looked directly at me and said something akin to, “You don’t need to enroll in this program. You need Mama Gena’s.”

I looked at her, confused but also intrigued. I had heard of Mama Gena maybe 10 years prior and even had her book somewhere, but had never considered doing a program like that. I was going through a really difficult time; Mama Gena’s just seemed like fluffy frivolity.

But I was adrift on a very turbulent ocean with no sign of land in sight, and I was starting to go under. So, that cold Monday morning, I googled Mama Gena. And then I picked up the phone.

I ended up speaking with Mary. Anyone who knows her knows that resistance is futile, however, I was not an easy sell. I was pretty attached to my suffering. Even while I was looking for relief and salvation, I was refusing it, pushing it away.

Mary’s accounts of women transforming their lives weren’t enough. I needed to speak with women who were going through a divorce when they did Mastery and hear from them how it helped them. I needed proof. I wanted a guarantee, I guess, that something, anything would help me.

Next thing I know, I’m speaking to a newly minted divorcee who was loving her freedom and herself after enrolling in the School of Womanly Arts Mastery Program.

My reasons not to do Mastery were dropping away, but the money thing was a really big deal. My ‘logical mind’ told me to save. Joining the program was certainly not a pragmatic decision for me at the time. Yet, somehow I knew I needed to do it.

The graduates I spoke with had what I wanted – confidence, fun, and supportive sisterhood. That day, my intuition took hold of the reins and made the decision for me. 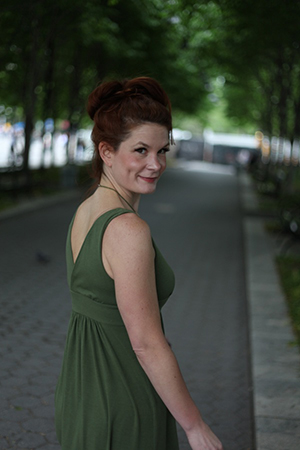 So, I took a deep breath. Called Mary back and said, “I’m in.” Yes, the price tag was insane to me at the time, but I got my ass into Mastery.

And I pretty much cried the entire time.
While I know that might not sound like a win…it was exactly what was necessary.

One of the things you learn in the course is how to welcome, understand, and move through your darkness. Which is pretty radical, since as girls and women, we’re taught to be nice, and pleasant, and ‘just fine, thank you.’

I was in an epic swamp of immeasurable depth and darkness. But because I was allowed – no, not just allowed, actually encouraged to tap into my truth, that pain began to move.

Without the tools I learned in class, I would have just put on a fake happy façade, trying to cover up what I was feeling, and all of that unexpressed grief and loss would have transmuted into bitterness. Instead, I got to tap into my truth, and move through the grief and loss in a way that remade me into the woman I am now.

After Mastery, I wanted to go even farther. I was a budding goddess, emerging from the chrysalis and just starting to figure out what these things called wings were for. I knew that sisterhood was my lifeline, and I had already experienced the fact that this paradigm, and the tools I was learning, were transformative. I decided to continue with Regena’s advanced course, now called Creation.

I worked the tools hard core. I started to take risks; if something terrified me, but also excited me, I knew it was something I needed to explore.

I took dance classes. I asked for raises at work. I started to get manicures (what NYC woman doesn’t get mani/pedis? That would’ve been me. Gotta start somewhere). And I started dating like it was my second job.

My very first date was with a guy that I wasn’t even interested in, but I knew I needed to ‘research’ dating and wasn’t ready for the big leagues yet. I was so nervous that my hands were shaking and I was afraid to hold the wine glass because I didn’t want him to see.

Slowly, with my sisters cheering me on, I began to turn up the volume. I started to flirt. I got va-va-va voom blow outs and glamourama eyelash extensions. And yes, by now, manis and pedis were a regular thing. I practiced the tools I learned, designed to help me receive, and take in all the good in my life, while making room for more. I remember realizing one day that I had become really, really good at dating – which was so deliciously entertaining to me.

My light turned back on. I began to absolutely LOVE having the entire apartment to myself, just me and my dog. I started hosting ‘desire salons’ with my little coven of close sisters. I wrote my desires. I looked at them all the time. I had the most amazing vision board in my dressing room. I wrote down pages of qualities I wanted my man to have; my desire list for the man I wanted to call in. I created the most exquisite altar and would sit there at the end of the day and do gratitudes by candlelight.

I even had several relationships during this time – I got the opportunity to practice Mama Gena’s stand to ‘leave a man higher’, exiting a relationship at exactly the moment when my intuition told me to. And, something that was very important to me – I created an amicable divorce with my ex-husband.

I signed my divorce papers on a cold, rainy Friday night in February of 2012, one year after enrolling in SWA. The mental snapshot of the paper – the color of the ink, his signature, my signature. So clear.

As I left the mediator’s office, I remember the surprising lightness, almost giddiness, of the endless possibilities of the unknown. Four days later, I spoke to Rob for the first time.

Our relationship developed very slowly, organically. He gave me the space I needed to explore what it would mean to be in a committed relationship again. (Because, quite frankly, I was super gun shy about committing to one man again.) But it was easy being with him and it felt really soooo good to have ease. And fun. And laughter. And, well, adoration doesn’t hurt either, right?

Long story short, we fell in LOVE, we moved in together, we got engaged, we decided to create a family.

With utmost intentionality, I called in my daughter (he helped too, of course ;), as did my beautiful tribe of Sister Goddesses, who lovingly held and nurtured my desire to become a mother.

Fast forward to this past year — 2014 was incredible; full of change, magic, and miracles.

Rob and I got married in a beautiful, sacred, intimate ceremony, surrounded by roses in full bloom and those closest to our hearts. I was very with child at the time, but decided to rock a wedding anyway. It was the most beautiful magical day. 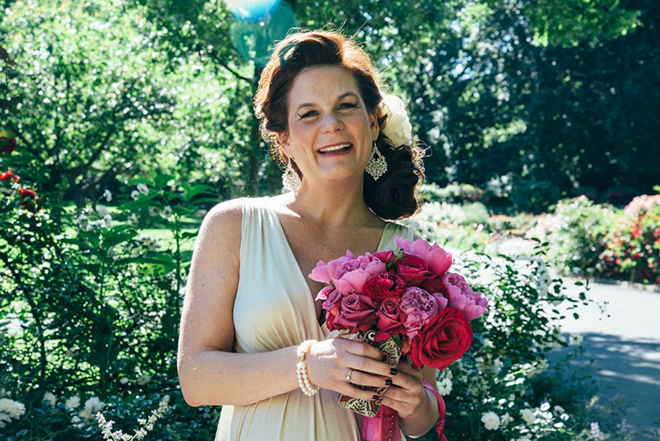 In early August, my beloved goddesses hosted the most beautiful baby blessing for me – high priestess Ayodele created a ceremony for me and my baby girl, and the goddesses all wrote blessings for me and for her. Oh my goodness, it was exquisite.

The energy and excitement was so compelling, that 4 days after my baby blessing, our daughter chose to make her grand entrance via an incredibly fast, intense, transformative, and empowering labor.

We are totally in love with this little spunky gal, albeit a bit blurry-eyed from sleep-deprivation. She is now 5 months old and motherhood is definitely the hugest adventure I’ve ever embarked on. I am so thankful for the rockstar goddess moms in my orbit that never cease to amaze me. So thankful for my husband being such an incredible partner to journey with – my love and gratitude for him continues to expand more every day as I see him being such an amazing dad and husband.

I now see that I absolutely HAD to marry my first husband. And I absolutely HAD to get divorced. It was not a ‘failed marriage.’ It was an incredible soul adventure that lasted 7 years and left me so much higher. And the cool thing is that he feels the same way.

I am a completely different wife with Rob than I was with my first husband. I am just so much more aware of the stuff that I bring to the relationship, my patterns, my shit.

The sisterhood I discovered changed my life. Women who believed in me when I couldn’t believe in myself. Women who held the vision for me when my desires seemed so far away. Women who put the mirror up in front of me, to keep me accountable to my truth. Our support for each other is deeply healing, paradigm shifting. 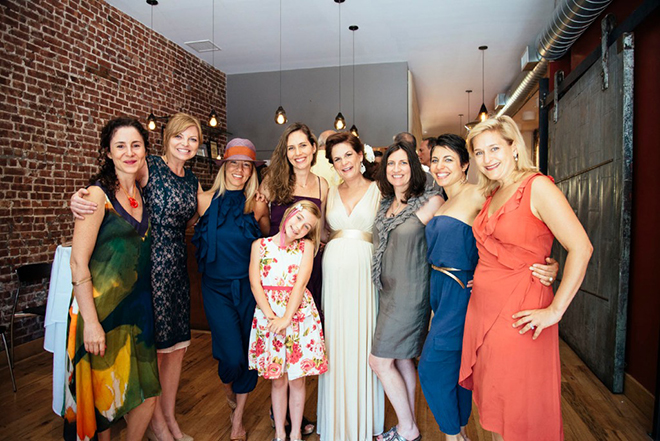 It’s been four years since I picked up the phone and joined the Mastery program. If I showed my life now to the woman I was prior to the course … I would be overwhelmed with gratitude. Even in my deep darkness, I knew that someday I’d get here. I just didn’t know how. I didn’t have any idea.

Mastery gave me the roadmap . . . and provided the best pit crew when I needed to pull over for refueling. And, something I could hardly imagine back in February of 2011, I learned how to actually enjoy the unfolding.

Thank you so much for reading about my journey — I’d love to connect in the comments section and hear what resonated, where you are in your own journey these days, and all about your beautiful desires!

As the rains pour down, there is this.