I have always been a pig-headed girl.
Always.
Sometimes overtly, sometimes subversively.
I secretly thought my way was always the best way.
I had no tolerance for a certain kind of conformity.

I got severely reprimanded for using orange typing paper by my closeted high school English teacher, since the white-out I used was, well — white.
Actually, I never ever even learned to type properly because I never ever ever wanted to work in an office.
When I was doing a chore I hated – like setting the dinner table – I would spit in the glasses of the family member I was loathing that day.
Pig-headed, that’s me.


Imagine how much better my English grade would have been if I were not so.
Imagine I could have typed my own papers in college rather than off-loading them to my boyfriend, or writing my whole first book in longhand on lavender legal pads.
Imagine enjoying my family chores instead of using them to get secret revenge.

Being pig-headed has downsides, for sure.
Pig heads are not so well-liked.
They are the problem-makers and shit-disturbers.
And they frequently make choices that might not make ‘sense’.

But the upsides so far outweigh all of that.
A pig-headed girl never ever lets someone make her do something she does not want to do, without saying and feeling ‘ouch’.
A pig-headed girl thinks her opinions – even if they are wrong – matter, and are worth fighting for.
She listens to the truth inside her, rather than opting for the party line.

She makes mistakes – no doubt. But she never makes the mistake of self-betrayal. Which, for a woman, is the most heart- and soul-breaking move that she was taught to make. 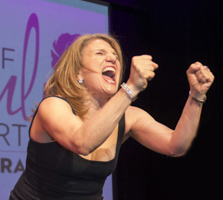 When a woman folds, and says yes to something or someone she does not believe in, she deflates a little.
Every tiny time she betrays her truth, and feels the guilt of that, more of her good sweet hot air seeps out of her.

Today is a good day to celebrate the belligerent.
The rebel.
The truth-tellers.
The marvelously mischievous pig-headed girls.

p.s. Are you a pig-headed Sister, too? Where in your life could you use a medicinal dose of pig-headedness to stand for your truth? Would love to hear from you in the comments below!

The pitfalls of being “nice”.