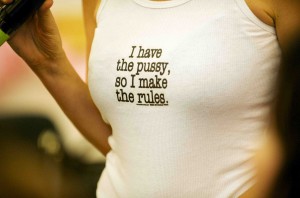 So far, 2012 has been a very loud year for Pussy.
Which is unusual.
I cannot recall a louder year, actually.
There have been ups, there have been downs.
And make no mistake, her voice has been LOUD.
The runaway success of Fifty Shades… brought the topic of sex and sexual gratification in a wider variety of circumstances and situations than ever before.  Hey, even at my barn, where most of the talk is about hay and horses, everyone was discussing it with widely diverse points of view.

In February, we had Pussy Riot, who staged a flash protest against President Vladimir V. Putin in Moscow’s main Orthodox cathedral.  Its members Maria Alyokhina, Yekaterina Samutsevich and Nadezhda Tolokonnikova, were sentenced on August 17 to two years each in a prison camp.  This radical sentence has struck a universal cord—especially as we are all concerned with how women are treated, not just in Russia, but all over the world.  Prison camp?  Really?  Putin, a former KGB spy and FSB head, has compared Pussy Riot’s stunt to a “witches’ Sabbath.”  Rock stars around the world have united behind this human rights issue.

Then, we had Representative Lisa Brown punished by being silenced on the floor of the Michigan House of Representatives, for using the word “vagina” in a floor debate over a drastic and repressive anti-abortion bill. In an opinion piece for The Detroit News, Rep. Brown talked about her speech and her colleagues’ reaction:
“I used that word because we were debating a women’s health issue. Vagina, by the way, is the correct medical name of a part of women’s anatomy lawmakers want to regulate. My statements were within the rules of the House and were clearly appropriate in relation to the bill we were discussing.  One of my counterparts, Rep. Mike Callton, R-Nashville, said ‘vagina’ is such a disturbing word that he would never deign to use it in the presence of women or ‘mixed company.’ This, from a man who earned a bachelor’s degree in biology.”
Lisa did the only thing that any sane woman would have done in her position.  She called Eve Ensler, the original Vagina firestarter, and staged a reading of The Vagina Monologues on the steps outside the Michigan State House.  Thousands of women attended.  Pussy on, Lisa!

Over the summer, we all watched in horror as Representative Todd Akin (also discussed in my blog post Why are you so nice?), the Republican Senate nominee from Missouri, provoked fury and outrage across the political spectrum a few weeks ago, by saying that in instances of what he called “legitimate rape,” women’s bodies somehow blocked an unwanted pregnancy. He has been asked by his party to step out of the race, but has refused.  He clearly feels very righteous about himself and his point of view.

And last week, Naomi Wolf’s new book, Vagina: A New Biography hit the stands.  Naomi has been mocked, trounced, trashed and raked over every literary and feminist coal in the book, for her effort to celebrate the heart and soul of the feminine.  I am in the midst of reading it, and I love it.  It is heartfelt, passionate, and courageous. Naomi is stretching herself, both as a writer and a woman, to wrap words around the disempowering silence that most women are raised with, concerning the heart and soul of their womanhood.  Our culture performs a linguistic cliterodectomy on every woman when we do not even allow our sons and daughters to use the word that describes that which is most essentially feminine about a woman.  “Vagina” is a start.  Vulva is even better.  Pussy on, Naomi.

And what about that group of protesters from Code Pink who interrupted Mitt Romney’s speech at the Republican National Convention?  The power of Pussy is such that the protesters were able to obtain credentials to the convention that enabled them to get really close to the stage. They were able to sneak in huge pink signs, which was a pretty incredible feat, given the level of security.  (Only Pussy can create openings where there are none.)  There were actually a fleet of Code Pinkers dressed as vulvas at the convention.  Spectacular.  Pussy on, Code Pink!!

So, what is happening here?  Is anything actually changing in the world on behalf of women?  Akin is still in the race, Pussy Riot is still in jail, the male-dominated legislative body who silenced Rep. Lisa Brown have not had their wrists slapped, and the jury is still out on how many copies of Vagina: A Biography will sell.
What matters is this:  Pussy is out of hiding.  She is moving front and center on the world’s stage.  She is ready for her close-up, and gaining support and recognition by the minute.
There was a day before Rosa Parks kept her seat on the bus, when no one seemed to notice the abject bigotry that was pervasive throughout our country.  Her brave step, less than 60 years ago, and the steps of so many others led to an awakening that led to the miracle of our first black President.
We are witnessing a global awakening.
Awakenings are messy business.  They produce outrage, unrest, struggle, and conflict.  But, the potential here is unmistakable—it is time for the re-introduction and reconnection of women to their source energy, their sensual fire, their raw creative power. The unmistakable message of Pussy:  You are the creatrix of life—a force of nature in human form.  You are capable, strong, resilient and irresistible.  Pussy, your time has come, and the time is now.

Please comment below:
Has the “Pussy Riot” awakening begun in your life?
If so, how?
Are you noticing new freedom?  New ways of living in your true feminine power?
Or, where could you use an awakening?  Workplace?  Love life?  Family?  Friends?
Where are you noticing that your lid is still on, and you need yourself a “Pussy Riot”?
I look forward to continuing the discussion with you below…

And if this topic revs your engine, you can ignite a Pussy Riot in another woman’s life by sharing this post on Facebook, Twitter, email, etc.

P.S. The Womanly Arts Mastery Program will be the largest Pussy Riot of 2013. Click here for more details or to take advantage of our Early Bird savings.

P.P.S. Got a burning question for me on your love life, family, career, etc., that you’d like me to answer in my next blog post? Tell me about it here.

This only happens once a year.

6 Practices I do every morning