The Book of Ruth

I want to talk about Sisterhood.
And Callings.
As in – the thing we are called to do in this life.
The archaic definition of the word ‘call’ is when the divine inspires, or urges you to do something.
We are not well-trained in listening to that kind of call. Especially because it is voiceless – coming from a place of eternity and infinity.
We are more trained to respond to texts, to e-mails, or reprimands.
We can get so busy with all the other kind of calls, that we can’t always hear the truth of our soul.

But sometimes, as you know, something — is it inside? outside? — makes you take pause. And pay attention to something that makes absolutely no logical sense. But it fills your soul to overflowing with the essential essence and elemental fragrance of intoxicating, overwhelming you.
Which frightens and captivates, simultaneously.

There is this woman.
A tall drink of water, you might say.
Head full of curls.
Heart filled with song.
Who has been a fixture in the Mastery classroom since it’s inception in 2006, and a student of the school a few years before that. 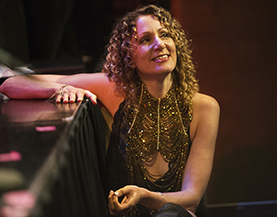 She was part of the team I had assembled to support the creation of the very first School of Womanly Arts Mastery Program. The other members of the original team fell away, but Ruth just lept forward to volunteer, as if it were her calling.
As we began the first weekend, which took place in a huge yoga studio, she happened to pop her ipod into the sound system and got everyone up dancing, at the very first dance break.

It felt so good, that we decided we could not be without the music.
And thus, the role of the Mastery dj, or ‘The Song Siren’ as Ruth Barron is known inside the community.

Ruth and I did not know each other very well at the beginning of this adventure. She found me as a result of her boyfriend watching an episode of 20/20 that I was appearing on, and he called and signed Ruth up for class, without question. This was back when I taught classes in my brownstone on 88th St.

Ruth basically never left my side. It was her then boyfriend, now husband, Jeff, who came in, all those years ago, and helped me build a room for the nanny and my daughter, when I got divorced. At that time, Ruth and I both had incredibly promising businesses that were broke and in debt, and both of us used the Mastery classroom, and a fierce practice of all the Tools and Arts to turn our companies around and become wildly successful.

But neither of us knew that would happen at the time.
All I knew was I was called to put together an even more expanded curriculum for women than had ever been created, that taught a woman how to connect with her sensual power, and to live the raw wild soul’s journey that was her calling, with a magnificent and perfect roadmap that provides Tools and Arts for navigational certainty, inside a magnificent community of sisterhood.
And Ruth was called, too.

She was called to stand by my side.
Your side.
Women’s side.
And play the perfect song, at the perfect time, that would crack a woman’s soul wide open and allow her to access that part of herself that she was longing for but could not locate.
Which isn’t the half of it, really.

Ruth held space for the creation of the School of Womanly Arts Mastery Program.
She sat with me for hours, in the hammock of my lover’s beach house in Southampton, while I tried to explain to her how I was struggling and striving to explain to women the perfection of all things.

And held me as I sobbed in her arms a few years later, when he died.
She held space as trusted beloved staff members came and went.
Held space as the larger storylines of women’s lives burst into the classroom like roving marauders, looking for home.
She architected and conducted bottomless heartbreak into redemption with her song.
She brought me back to myself as a leader when I got flung too far inside a devastation that needed to be witnessed, held, and loved back to itself. 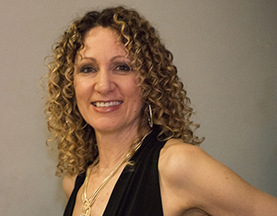 And no one, no – not anyone anytime ever in the history of the world and beyond- could hold celestial sacred celebration and explode the roof of joy on a rockin crazy dance party playlist, like Ruth Barron.

Ruth and I have made ecstatic love to thousands of women in the work we have been called to do.
I brag my friend, my sister, Ruth.
It has been my honor to share a calling with you.


I wanted to share this story with you today, because we are not taught in this world to honor and respond to callings. Nor are we taught to value Sisterhood, inside of those callings.

Good things come – really magnificent, inconceivable magic is created when you follow a calling, entrenched and surrounded by Sisterhood.

I’d love to hear from you in the comments — what’s a calling you have followed, how did Sisterhood play a part in it, and what’s come from it?