So you’re stuck, huh?
Have you tied yourself into a big fat twisted stuck-knot?
Ugh. It’s the worst.

Stuck is everywhere. And there are so many ways for it to show up . . .

One thing about women is that we take our stuck very, very personally. Don’t you? Aren’t you convinced that something’s wrong with you, that it’s something inside you that has you immobilized like a fly on fly paper?

Here’s the thing. I’ve got a little secret to tell you. This is collective stuck. Let’s zoom out here.

It’s important to know that you live in a world that does not understand, accept, honor or celebrate being a woman. You don’t have to look very far for proof. Look at the headlines, any day, and you’ll see what kind of hostile environment women grow inside of.

There are child brides. There is gang rape. There is abuse. Women still earn 77 cents on the men’s dollar. Out of the 190 Heads of State, only nine are women. I could go on.

And there are personal consequences to those global headlines. Because what happens, is a woman begins to internalize this exterior culture. You were educated with no words, by the culture itself. You were taught to be stuck.

Without anyone telling you that you were not supposed to lead the country, or move to the head of your class, or make as much as or even more than a man, or be free, loud, proud, sensually confident on your college campus, be capable of making decisions, trusting your intuition, moving from your deepest creativity, all of that somehow got cut off, got stamped down, tamped down.

All of that light was not encouraged to fire.

This is not about being victims, in fact, it’s the opposite. It’s time to take back ownership for every perfect painful drop of our stuck.

The good news here, is that we are now in a position, like never before, to get in motion. To rise and thrive as women.

Don’t get me wrong – it is no small feat to get unstuck – which is the reason women fly thousands of miles and hustle like nobody’s business to get themselves inside the Mastery classroom.

But whether or not I’ll see you in Mastery next month, I want to teach you two steps to get started, right here and now. These are simple, but not easy.

Say yes to your stuck. Own it. Mean it.

This is an internal shift of how you’re thinking about that place in your life that you just can’t seem to make headway in. It’s about being in a different kind of relationship with your Stuck. When you “yes” your stuck, you begin to make more room inside yourself for it to move.

Why? Stuck is in the eye of the beholder. When we judge ourselves for where we are struggling, we lock in our stuck.

Call up a sister, and dump your stuck inventory. (If you’ve read my book, or taken a course at the School, this exercise is a variation on Spring Cleaning.)

You can also do a written stuck inventory, but it’s not as powerful as sharing it with a trusted sister.
Either way, let ‘er rip. 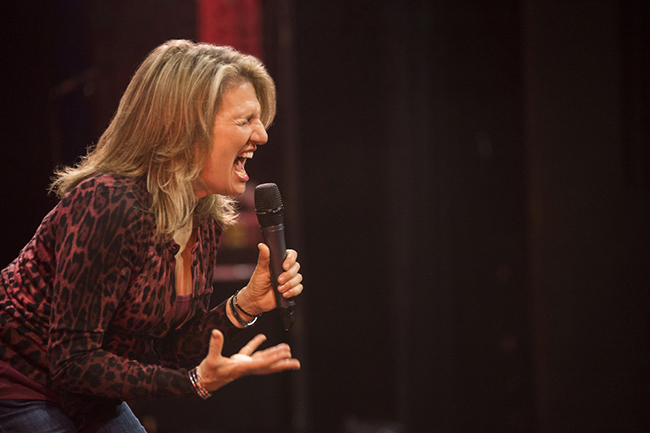 Your Stuck Inventory includes any place where you’re shut down. Or hopeless. Or feeling like this one area of your life is never going to improve or heal. Or completely out of ideas for how to “fix” it. Or up to your eyeballs in frustration.

Here’s how it works: Each of you will get 3 minutes to share where you’re stuck. Just get it out and put it on the table. Then switch. That’s it.

Seriously. I know this sounds counter-intuitive.
Normally, we try to hide our stuck.
Or act as if we are unstuck when we are really knee deep in fly paper.
And when you admit first to yourself, and then to a close compatriot, your deep stuck truth, you have unlatched the hatch on what is holding you in place.

I want to assure you, it’s not permanent. But we cannot use the tools of the father to dismantle the father’s house. This Stuck calls for different tools, a new paradigm, a new path.

After you do the exercises above, I want to hear from you in the comments. Where are you stuck? How much can you “yes” it? What are other strategies that help you get unstuck?