The Urgency for Sisterhood 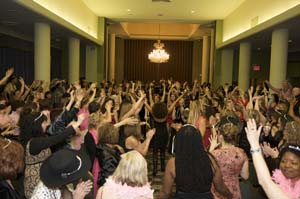 So, hopefully you have all been as glued, as I have been, to the Governor Patterson story that has been ripping through the headlines these days. Yes, I believe he should leave office. Yes, he is not fit to govern. Yes, he even makes Elliot Spitzer, (who left office under the scandal of hiring a prostitute) look like a better, less offensive choice.

Who knew we lived in world where we weigh politicians by their incrementally different level of unconscious bigotry against women? And all of that concerns me. Keeps me up at night.

But it does not concern me nearly as much as the story behind the story. The story behind the story is a 5,000 year old conspiracy, which we must eradicate, in our lifetime. It is a conspiracy to keep women small, and powerless. And for women to use their influence with one another to put each other down and stifle and silence one another, rather than support, or stand for each other. It turns us away from each other rather than have us link arms, join forces, voices loud and strong, and sing, on top of our lungs, on behalf of one another.

Patterson knows women’s bigotry against one another, and used it to his advantage. He asked two women- his press secretary, Marissa Shorenstein, and another state employee, Deneane Brown, to contact the domestic violence victim, Sherr-una Booker and ask her not to appear in court. And they succeeded. And she did not appear in court to defend herself or ask for protection.
Sisters.

There is an invisible epidemic of self-hatred, self-doubt, and self-denigration amongst women, right here, right now on this planet. A woman who truly madly deeply outrageously loved herself would never conspire to stifle and threaten a Sister and obstruct her ability to receive the protection she deserved. I mean, c’mon girlfriends- this woman was beaten up by her boyfriend– and these women told her to shut up and go away because the Governor says so. We are talking about a Sister, here.

This would only happen if you were a woman who had no self-esteem, no self-worth, and required the approval of a man to know your value. But we live in a world where women have an epidemic of self-hatred and self-doubt, rather than self-love. That is why I created the School of Womanly Arts Mastery Program. It is the only place on earth, the only school on the planet where women can check their self-doubt at the door, and learn the arts and tools of living the gorgeous rapturous power of self-adoration, which generates the most powerful consequence of Sisterhood that has ever existed. Here women shout from the rooftops on behalf of one another, celebrate every single accomplishment with outrageous enthusiasm, and stand for one another fiercely–especially when we each have those moments of faltering in our intention, and conviction, like Sherr-una was having when Marissa and Deneane called her.

Imagine with me a world where, instead of women calling each other to diminish one another, we each call each other out to our greatness, our glory, and our power.

So, this is me, Mama, calling you out.

Calling you out to recreate the world with me.

To stand for yourselves.

To stand for Sisterhood.

To stand for the woman you deserve to become.

To stand, together to recreate the world to celebrate women, celebrate sisterhood, internally, locally, internationally, right here, right now, in our lifetime.

Come and take my Mastery Program this spring.

Become part of the Pleasure Revolution.

I also, invite Sherr-una, Marissa, and Deneane to come, as my personal guests, to the School of Womanly Arts Mastery Program, starting in just 18 days.

It’s time for us to create a new story.

The time is now, my darlings. Spring Mastery kicks off Saturday, March 20th. (Click here for all the dates and details.) Tonight, Wednesday, March 3rd, I am hosting a “Welcome to Spring Mastery!” call, which you can participate in live if you enroll by 6:00pm EST today.